The Brazilian DJ and house music producer discusses her first gigs back, her forthcoming album, and the making of her new sample pack, Analog Inventions — out now via Loopmasters.

It’s a well-worn music cliché – your second album is never as good as your first. But it still serves to intimidate many artists gearing up for their second crack of the whip. We’ve all heard about “second album syndrome” and the “difficult second album,” which is why it’s all the more surprising that Joyce Muniz views her sophomore release not as a hurdle, but as a chance to set things right.

“My first album, Made in Vienna, was not something that I really planned,” Joyce explains. “It came out in 2016 and I’m proud of what it was, but it felt like it was just a case of me having so many tunes and deciding with my management that we may as well put an album out.”

Born in Brazil and moving to Vienna in the mid-90s to pursue her musical dreams, Joyce’s use of the Austrian capital in her first album title was a recognition of the role the city played in shaping her sound. Starting off playing drum and bass in the legendary Flex club, Muniz later built up her production skills by collaborating with her contemporaries across the Viennese music scene. Her new sample pack, Analog Inventions, is everything you’d expect from an artist who specializes in fat house basslines and deep, percussive drums. With all the time off DJing recently, did you get a lot of time to work on the second album?

It’s almost done, I’m just waiting for one more vocalist! It’s been such an important project for me because I’ve been talking about it for so long. The second album shows the different paths of my music journey; drum & bass in the late ‘90s, breakbeats, dub house, indie stuff, and house music. I didn’t want to just make tracks for people to play in the club straight away, I wanted to show off a different side of me through the kind of music that I like to listen to or play at home for my friends. I do a radio show on Rinse FM, and that opens me up to all types of music. Also, as a producer, I work with many kinds of songwriters that make different styles. I’ve learned so much through working with other people and being the producer in the background, and that’s why I’m able to make this album now.

Which do you prefer, collaborating with other people or working on your own?

It really depends. There’s a jazz singer from Austria called Louie Austen, and I produced his last album in 2012 even before I did my own. It was fun for me because obviously, I brought my deep house vibes and know-how to the project, but I had to connect with his energy too, and it really opened my horizons. I think that the most important thing when you’re collaborating with someone is communication, and that might not always be through talking. When I worked with Louie, he was in his sixties, and sometimes he was sitting there humming something that was in his brain to me. I would get him to find a track that sounded similar to what he was hearing in his head, and suddenly we were communicating through music.

Your new sample pack is called Analog Inventions. What kind of analog gear did you use to make it?

The soul of my sample pack is definitely the Moog Sub 37. It’s more than just a bass synthesizer, it has amazing leads and pads that you can use to make all kinds of music. When you take your time with a piece of equipment like that you find out more and more about it. I used the Minibrute 2S a lot and an Elektron synth, which was actually one of the first bits of hardware I ever bought. I mostly used Maschine for playing around with drums, but I made some kicks with the Elektron because I was trying to stay as analog as possible. 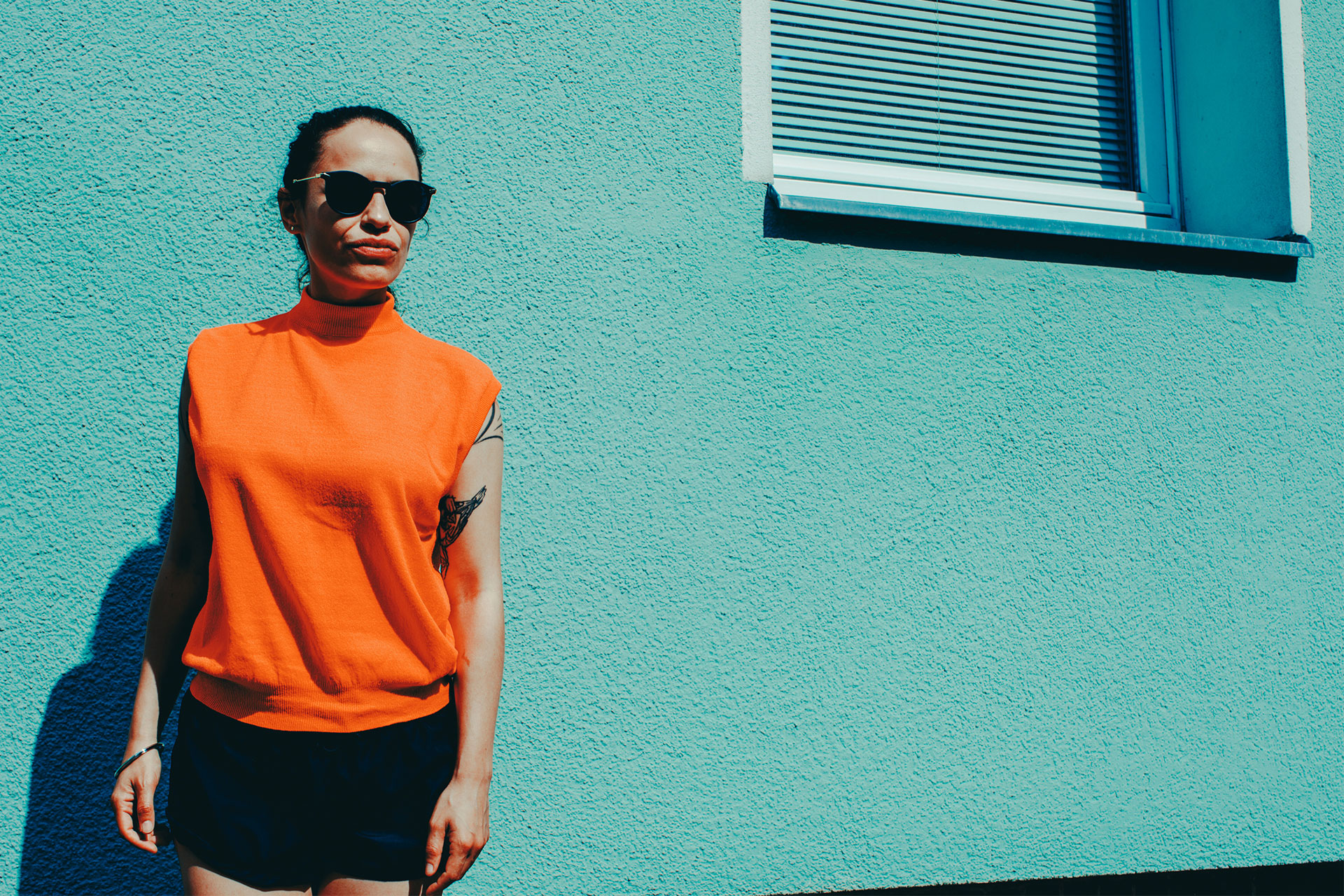 Where do you start experimenting with your ideas, in a DAW or mostly in Maschine?

It depends on what’s already warmed up and switched on! I always start with a kick, jump straight to the bass, and then try to find the right synthesizer to play melodies. Maschine is something that’s always running next to everything else, because you can play around with the drums like it’s a jam session. When I started producing I was only doing mashups, so I’m a DJ/producer, not a producer/DJ. If you listen to my productions, you can hear that I’m playing around with many layers and sounds; that’s just the way I make my music.

Do you think coming from a DJing background has had a big impact on the music that you make?

I think that me being a DJ producer means that I make tracks that are very DJ-friendly. Regardless of whether the track has vocals, or sounds like a “written” song, it will still be a track that you can play on the dancefloor. I often think about the need to give DJs space in the track so that they can use filters or things like that, because I played drum & bass myself back in the day. I have some friends that only play live and don’t produce, and they often send me a track to mix and I have to tell them to make the intro and outro more friendly because there’s so much going on – producing and DJing are different mindsets.

Do you have to slip into a different mindset yourself when you’re designing sounds for a sample pack as opposed to your own songs?

When I was doing the sample pack, I went through so many loops and ideas that I never finished, trying to find sounds that fit the idea of the pack. I would find a bassline that was amazing and take it out of the track, then I would try to find the right kick, the right drums, the right melody to fit around that. It was very important to me that each idea from the pack sounded just like a small track, even if it was just a one minute jam.

If you listen to the pack, the chord progressions and notes that I used are very simple. You can use them to go a little bit slower, or a little bit faster, but the character of the sound won’t really change if you go in either direction. I didn’t want the energy and the vibe to change completely if you used the melodies in different tempos. I saw that you played some gigs in Poland recently, what was that like after so long in lockdown?

It was incredible! Poland was one of the only countries in Europe that I had never played before, and for my first two shows after lockdown to be there was great. Both shows were open-air and fully packed, and the promoters were so happy to have me that they let me play longer sets. I played a lot of old school stuff, because during lockdown I had time to clean all my hard drives and go through so much old music, so half of the set was new material, and the other half was a lot of electro tracks from the ‘90s and 2000s. It was a bit weird because it almost felt like the last year hadn’t happened, like I just hadn’t gone out for a week and now here I was back in the club! After ten or twenty minutes you get used to the crowds again and then you just go with the flow.

Are you excited to get back to playing at the same level you were before the pandemic or has the time out given you a taste for a bit of quiet time?

I hadn’t played two gigs in a row for almost a year and a half, and it was definitely intense; sleeping for a couple of hours and then getting a connection to the next city. I needed a couple of days to recover, and I was asking myself would I be able to manage if it gets as busy as it was before COVID-19, when I would play three gigs in Asia, travel back to Europe for gigs and then head to America? I don’t know how my body will cope with it, although I’m very excited to find out because it feels like it’s something new all over again. Throughout your career, you’ve been able to witness the rise of social media. What have you noticed about how it has changed the industry you work in?

The influence of social media on the industry started with MySpace, but it was more for exchanging information than showing off. MySpace helped me to get in touch with artists from other countries or other continents, and we all started booking each other. Nowadays it feels like music is almost less important than personality. Promoters only book people who have thousands of followers, and this is affecting the culture of the industry, it has become very one-sided. For example, I have a bunch of friends who’ve been producing amazing music but don’t get any shows because they aren’t posting enough. That’s a bit unfair, and the only people that can change it are the promoters and bookers.

What do you have coming up that we should look out for?

I’m super excited to have a track on the next Permanent Vacation compilation together with my friend Alinka, and I’m also very happy that I have a remix coming out in July for a singer-songwriter from Berlin, Joplin. My next Joyce Muniz EP is coming out on Pets Recordings in October, and it’s nice because I’ve been playing all these tunes in my latest live streams and gigs and the feedback has been great. I can’t wait to share it with everyone out there!

Gallery image with caption: Artist of the Month: Even in Lockdown, The Legend of Carl Cox Grows