Five Experts Pick The Best Studio Monitors, Whatever Your Sound

Five Experts Pick The Best Studio Monitors, Whatever Your Sound

Luke Slater, Cinthie, Junior Jack and others offer their tips buying the right studio monitors, no matter your sound.

If you’re making music, sound quality matters. The monitors you have in your studio, bedroom, or wherever you make music, will dictate how you hear the results of your labouring. Regardless of what instruments, effects, or samples you use, your speakers will define how your music is heard by you and everyone else. So, no pressure then.

Whether you’re a first-time buyer or looking to upgrade your setup during lockdown, being better informed is always a good decision. So we’ve asked a variety of producers and experts to offer their advice, earned over decades, for the best studio monitors whatever your sound. One man who knows a thing or two about studio speakers is techno legend, Luke Slater. With over thirty years of experience making countless records for the dancefloor, the techno don has a good grasp of what his ears need. Although Slater has become a self-confessed “monitor junkie,” one particular set of speakers have never left his studio — the very first he ever purchased — the Yamaha NS10s. “In the 90s I used them on everything. Now I use them differently, they’re secondary just to check things because I know how they sound.”

Understanding how a speaker sounds, and the effect it has on your music, is crucial, Slater states. “I’ve never believed that monitors should act as the pinnacle of what you’re trying to do, [because] they all sound different,” he continues. Today, Slater now has five sets of monitors in his studio which he continuously swaps around for variety. These include a pair of PSI Audio A21s, Barefoot Sound MiniMain12s, and a set of ADAM Audio P11As, which he uses as trustworthy main monitors to write with. “They’re kind of my NS10s when I’m working,” he says about their familiarity.

“The key to find working with monitors, whichever you choose to work with, is to listen to lots of music you know with them,” Slater recommends. “I love monitors, but I don’t think I’ve ever trusted them to produce what I’m trying to do.” He references his remix of Joey Beltram’s “Forklift” from back in 1996, which at the time was done using the NS10s. “There was so much bass on that track, but in reality, I didn’t even know that bass was there,” he explains. “When I played it out in the club there was this amazing sub, which was actually a nice surprise.”

Ultimately he finds it’s hard to really recommend specific monitors for your studio. “You don’t really need a massive pair to do anything,” Slater concludes. “It’s more about learning how your monitors sound. And if it’s a good track, it’s a good track.” German house and tech house producer Cinthie started making music around the turn of the century and has gone on to renovate and manage several studios in Berlin, in addition to her work running several record labels and a Berlin record store. Back in the very beginning, she was making music with a pair of Blaupunkt speakers, along with her Atari and copy of Cubase 2.0. “They were pretty good for listening to the radio but not so nice to make music,” she quips. “I was actually using my DJ headphones a lot instead, the classic Sennheiser HD 25s.”

Understanding what she required from her setup took time and experience for Cinthie. “When I had my first proper studio with my ex, we used his KRK Rokit RP7 speakers, but the room wasn’t treated at all and the sound was banging from the door to the window and back.” At home she upgraded to a set of Genelec 6010a monitors, which she liked, but needed to keep the lows down to appease the neighbours. “Then I moved into my last studio, and started using my Genelecs as well as some KRKs from a friend. But since my room was professionally treated, they weren’t powerful enough.” Finally arriving at a setup that works, Cinthie recently moved to a new studio taking all the treatments, absorbers and diffusers, and upgrading once more to a pair of Adam S3Hs.

“When looking for the perfect speaker, you need to know your room a bit,” explains Cinthie. “What sounds good for others might not be ideal for you because of the treatment or studio size. I was looking for some powerful speakers that are true to the sound and also powerful in the low ends.” As well as having a good understanding of the room you’re working in, she also recommends that you get to know what tracks you want to reference. “If you have other producer friends with studios, take the track you know best as a reference and test several speakers. You can also go to shops, for example, Just Music in Berlin has a room with all the speakers they are selling and you can plug in your phone and you play your track and can test them all. Make your own experiences, know what you are looking for, but definitely and try to to test a few before buying some expensive speakers.”

Check out the latest releases by Cinthie here. Even those most adroit producers have the humblest of beginnings. Kittball Records co-founder and hit-maker (see 2013’s “Come on (set it off)”) Juliet Sikora started off producing music using the classic M-Audio AV42s — a great introductory speaker at just $99 — until a friend recommended she upgrade to the Yamaha HS80s. “They are the entry-level model for many producers with an honest sound,” explains Sikora. “They have a great bass sound but are slightly weaker in the highs and middle.”

“For me, monitors are very important because they are the perfect tool for my ears,” she continues. “There are many monitors out there and all of them have pros and cons, which you have to outweigh and learn how to use correctly.” Like Luke Slater, she always keeps a space for her very first studio monitors — the M-Audio AV42s — so she can use them for referencing new tracks, having trained her ears to their sound. “I want my music to sound good on all speakers, even on car stereo speakers,” she explains. “Monitors are true and very clear, but they don’t reproduce the sound that you hear in a club or on your HiFi sound system.”

“The most important thing to know is that you don’t need to spend a lot of money on monitors,” she goes on to explain. “You just have to learn how you use the right tool for yourself, and those are your own ears and the passion and perseverance to constantly learn new things. Never stop learning.”

Check out the latest releases by Juliet Sikora here. “Monitors are the most important piece in the studio,” states the internationally acclaimed big room house producer Junior Jack. Having helped characterise popular house in the early 2000s  with a string of chart-topping singles, the Italian producer (who also went as Mr. Jack and Room 5) has built his reputation on expressive and robust aesthetics, and relies heavily on the power of sound to convey his energy. Like Luke Slater, the Dutch producer started off with a set of Yamaha NS10s. “They were the standard in a studio back in the day, and are still used a lot today.” Nowadays the house producer has upgraded to Barefoot monitors: “it’s like comparing a villa with a camping car,” he jokes.

Getting to know the monitors and understanding their sound is of the utmost importance to the Italian producer, to which he prescribes a lot of testing, and taking time to get used to how they perform. “Studio monitors are very personal and it takes quite a while to get used to them,” he recommends. “Take time to test a few (in your room) until you like what you hear.” But above all else, the Jack’s main recommendation is that you ensure the room in which you make music is treated properly. “If what you hear is wrong, you will choose the wrong sounds for your productions — the room acoustic is even more important. Having great monitors in a bad room will not help.” 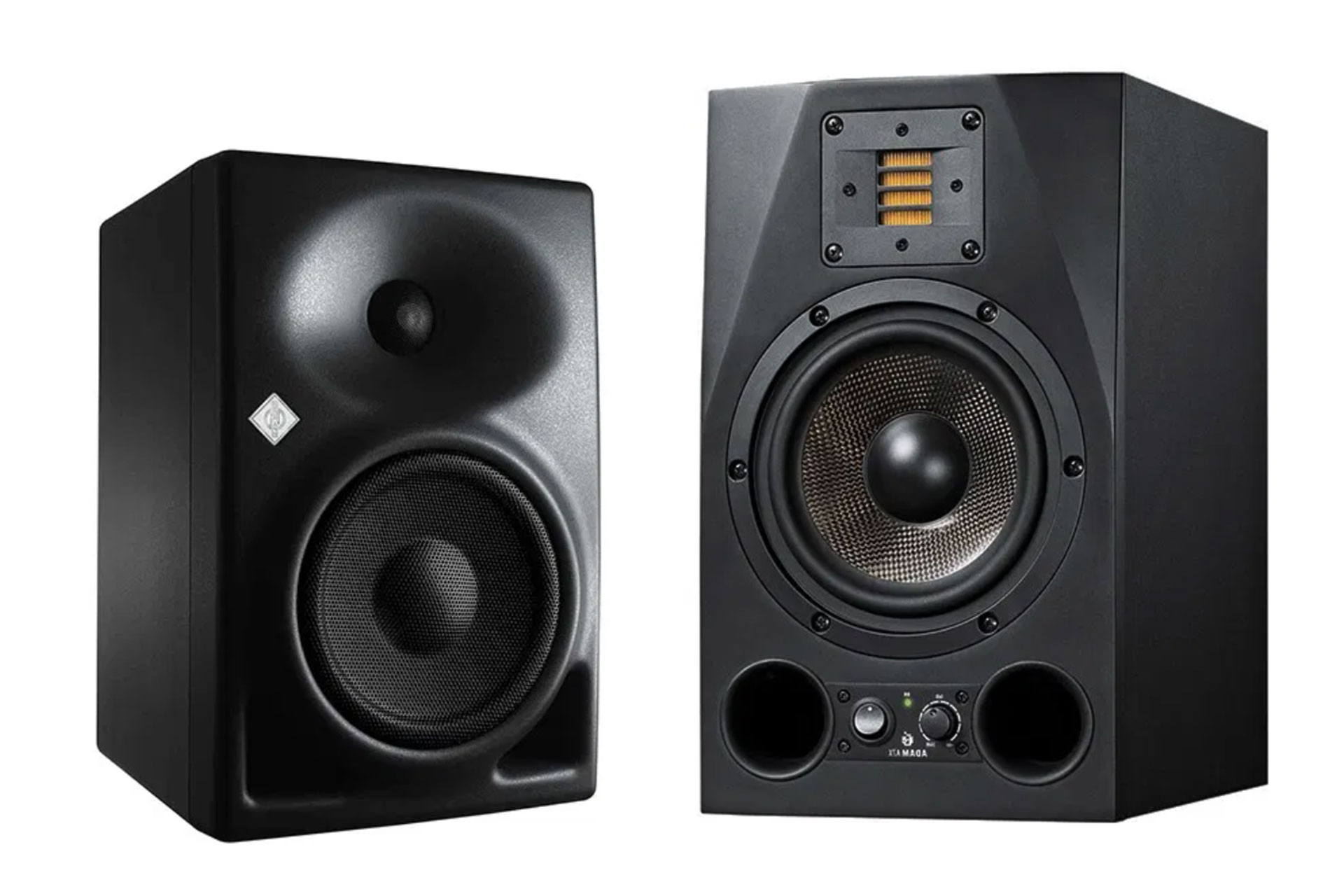 As one of the biggest global retailers of music hardware and instruments, Thomann has a firm grasp of what people are looking for when it comes to studio monitors. “A producer has to analyze a recorded take or mix and ask, ‘Is this a good sound, can all the details in this specific part be heard, do I need to make adjustments, or use an EQ for example?” states Thomann Studio and Synthesizer department’s Oliver Kruse. “These are just some of the hundreds of questions a music producer or engineer has to answer while working with music.”

When it comes to answering these questions, Kruse has a list of recommended speakers for producers to take on board. His first choice would be a pair of Neumann KH 120 As, which are currently priced at 600 EUR. “The Neumanns offer superb impulse response and resolution. With the exceptional bass depth and precise dispersion, they will do a great job in every environment. They are especially recommended for working with vocals, speech, and acoustic instruments.” Also recommended are the Adam A7X by Adam Audio at EUR 549. “The Adams are also very powerful and precise. In the lower frequencies, they have a bit more punch and body than the Neumanns. Also the special X-ART tweeter gives fine details to the highs.”

His other choice would be the handmade KS Digital C5-Reference speakers which, according to Kruse, “have a high level of linear frequency response, and are often the favorites of post-production and mastering studios,” available at 689 EUR.

For more Thomann offers, check out their speaker store here.

Dan Cole is a freelance journalist living in Berlin. Find him on Twitter.