Ahead of her forthcoming release with Carl Craig on Planet E, Detroit’s legendary DJ Minx provides an exclusive mix, and discusses why 2021 has been one of the most important years of her career to date.

Detroit house music staple and Women On Wax label-founder DJ Minx has been lighting dance floors ablaze with her seductive sound since the early ’90s. But 2021 year has been a breakthrough year for the celebrated DJ/producer for a multitude of reasons.

She started with the release of her red-hot and politically charged house track, “Blind Amerikkka,” which featured celebrated producer and spoken word vocalist E-Man, and contained a hard-hitting message about racism and political division in America. And for Pride month in June, DJ Minx courageously came out to the world via social media, stating: “So here I am. Minx, DJ, producer, Momma, partner, lesbian, friend.” She also released “Purse First” to celebrate coming out, and has recently kicked off her Do It All Night tour, hitting numerous cities across the US.

DJ Minx is a champion of women’s empowerment in the dance music scene and a central figure in Detroit’s dance music saga. Her Women on Wax label has helped elevate and nurture numerous Black female artists, earning her numerous accolades and awards, including the Spirit of Detroit award for her invaluable contributions to the Motor City’s cultural landscape.

She’s played alongside the likes of Derrick May, Frankie Bones, Kevin Saunderson, Basement Jaxx, Juan Atkins, and Carl Craig, who collaborated with DJ Minx in the studio during the pandemic to create several exciting new releases — forthcoming on Planet E, our August 2021 Label of the Month.

We recently caught up with DJ Minx, who shared stories about her early days in the scene, the founding of Women On Wax, her relationship with Carl Craig and Planet E, her coming out to the world, and more. She also handed over an exclusive and “banging” mix for our readers to enjoy as they learn more about this Detroit dance music icon. Check out the interview below and listen to the mix in the player above. Hey Jennifer! Thanks for joining us. How has it felt to be traveling and DJing again?

Hey! It’s actually good to have the presence of people in front of me, dancing their hearts out. I mean, it’s like a rebirth! People are dancing harder, staying on the floor longer and are showing more love these days. I am enjoying it!

Take us back to Detroit’s Music Institute in 1989. What were some of the shows and acts who inspired you to pursue a music career?

Ahhh…the Music Institute, where my love for techno and house music began. D. Wynn’s track selection on Saturday nights was ridiculous, he had some helluva sets. On Friday nights, Derrick May lit up the floor like a holiday tree. He was a commander. I was intrigued by his talent, so I would watch him play every week. Once, he asked what I was looking at (I was in the booth) and I responded, “I can do that,” (talkin’ smack!). The next time I saw him, he asked if I was playing yet and I said no (with the look of WTH on my face). He told me not to come back into the booth until I was playing. Then, guess what? I started practicing spinning records!

How did you first come up with the notion for your all-female Women on Wax collective in 1996? How has the collective and record label evolved since its founding?

I had a residency downtown at the Parabox club on Mondays and wanted to do a night of all-women DJs because a lot of them talked about not being able to play out. At the end of the night, I said good night as usual and announced the lineup for the following week. They started chanting, “We want Women On Wax!”, so I decided to continue with the all-lady lineup. I then started receiving calls from ladies, letting me know they heard of my night and asking me if I would give them advice on how to get hired, and what I did to get ahead. That’s when the collective began. I added more and more women and it started to grow. It felt good to be able to support them with what I knew.

Moodymann is the reason Women On Wax became a label. He said he liked the way I played and that I needed to expand. “If you know how to mix, you know how to produce, come on baby!” Kenny is a beautiful being. Always has been.

I didn’t want to only have women on the label, but that was my initial focus. I started to incorporate vocalists and musicians and eventually started creating deeper beats.

When was the first time you met Carl Craig? Can you tell us about your relationship with him and how it’s developed over time?

I met Carl through DJ Overdose, who had a small record store on Gratiot [Avenue]. I believe Carl had a space in the same building at the time, but if that’s not true, he’d better not fuss at me about it! I’d just started spinning and we always talked about music. One day he said, “I’m about to start something big.” Wouldn’t say what it was, and told me to “just be patient.” Little did I know it was big, because he was talking about Planet E! I was proud of him then and still am today. Whenever we talked, it was about music. When I started the label, conversations became about production. We’re good friends to this day. During the pandemic, we started to work on some gems, which you will hear about real soon. 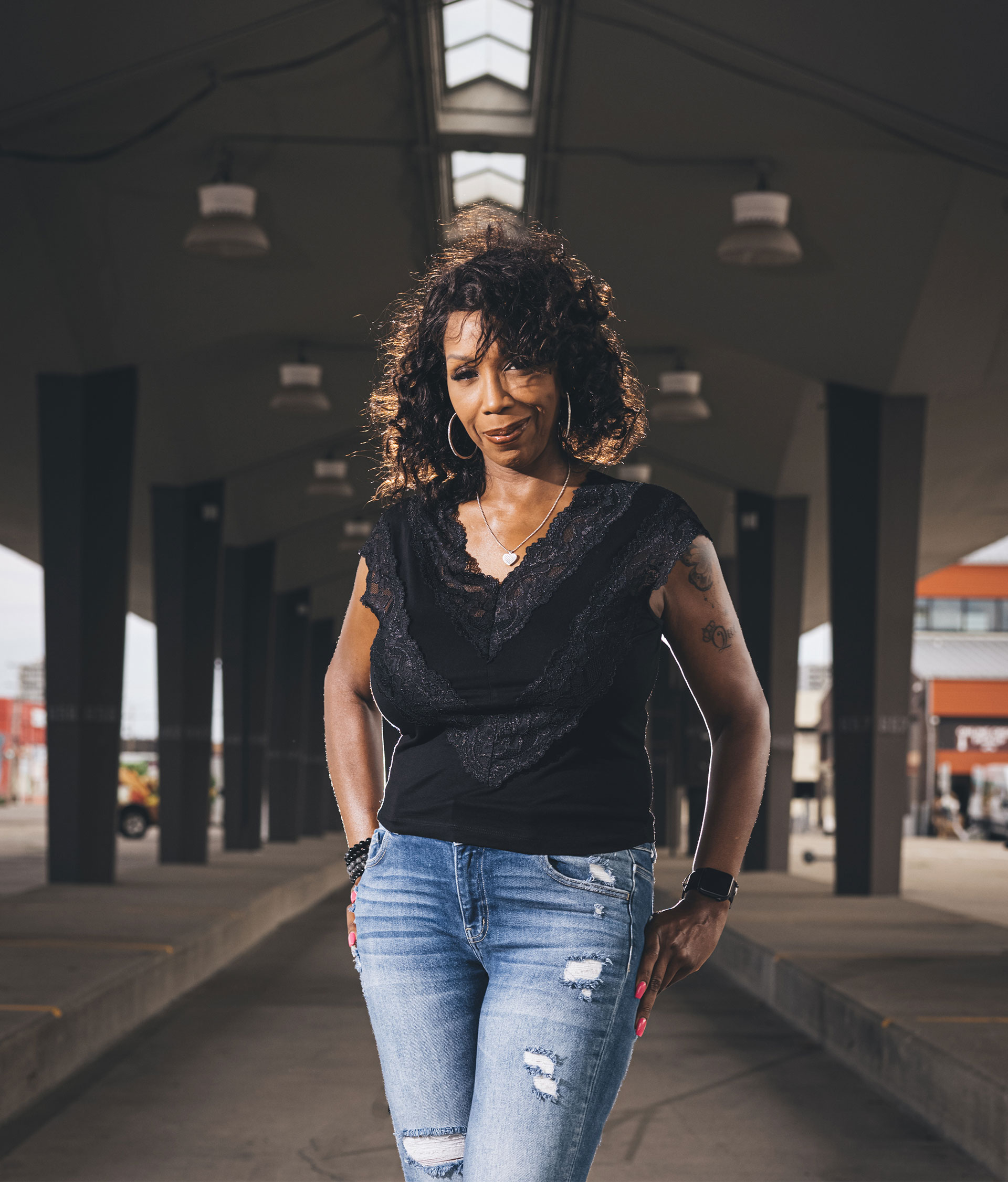 What are your hopes and thoughts on the future of Detroit’s electronic music scene?

I would love for the up-and-coming artists in the D to learn about the music and where it all came from. More producers would be wonderful as well! A lot more people are into DJing, and I just want to see more bloomers from our city — especially women! A thriving club for techno and house music exclusively would be fantastic, I’d love to see that happen.

What are three of your favorite Planet E Communications releases (new or old), and what significance do they hold in your heart?

Ohhh my goodness, “Bug In The Bassbin!” That was the first track on PE that I fell in love with! I still have the hand-written white label and would play it over and over again. That track goes well with a chill set and a drum and bass set as well. I loved watching the B-boys dance to it at the Music Institute.

The second would be “Art, Love & War,” the track that Carl remixed for Monty Luke! The keys and buildup of that mix was everything — as were all of C2’s re-productions.  I loved Monty’s productions, so that’s a no-brainer there.

And last but not least, “Night Lights” by The Oliverwho Factory. When I heard this, I had no idea it was from Planet E, or that the crew was from Detroit. It sounded like a soulful European piece and I couldn’t get enough of it. It was the synths that did it for me. Still sounds amazing today, timeless!

Back in June, for Pride Month, you came out to the world writing: “People suffer from emotional anxiety at the mere thought of “coming out”, but the stress of not doing so is taking up WAY too much of my space and is shaking my energy to the core.” How did you feel at the moment of the announcement vs. during the end of Pride Month? How has your life and mental health changed since the announcement?

That! When I was preparing the post, I was a mess, really. I was stressed out ridiculously. I posted, closed my laptop, threw my hands up, and sobbed. My phone started ringing and the notifications went wild. The love was overwhelming! I was happy to know that my friends and supporters had my back no matter what. I feel like a ton of weight was lifted off my back. I am no longer holding onto things I have to keep to myself “because of other’s opinions.” My stress level has gone down and I am living.

Tell us a bit about the mix you made for us.

I put some of my favorite sounds together. There are some four on the floor tracks, some jackers and a bit of tech house too. I present them to you in a banging set, with a bit of a deep ending, enjoy!

Rockwell Picks The 6 Most Important Tracks of His Career